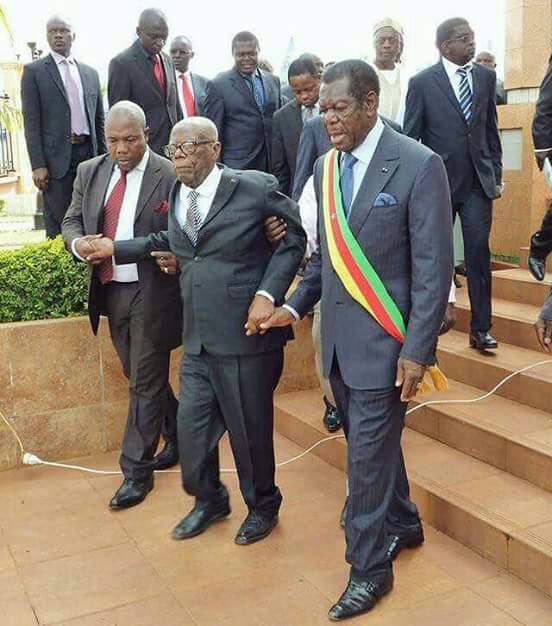 A picture showing an old man who is being helped to stand on his feet is being widely shared on social media and portrayed as showing Cameroonian President Paul Biya being assisted by two other men to a podium to campaign for reelection.

So, this fact-check report will seek to verify:

Using Google Images, GhanaFact conducted a comprehensive image search on the web and found the image has been circulating online since 2018 and has featured in news stories by some news portals (here, here and here).

However, the frail old man in the viral image is not Cameroonian President Paul Biya. “No, that is not Paul Biya.” A Deutsche Welle journalist from Cameroon, Mimi Mefo told GhanaFact after assessing the viral picture.

According to an Associate Professor of Journalism Studies at Aarhus University in Denmark, Dr Teke Ngomba, “the old man in the middle being held is Kadji Defosso– he was one of the wealthiest men in Cameroon.” But the business tycoon and industrialists died in 2018 at 95.

“The other guy with the sash of the Cameroonian flag- was also one of the wealthiest men in Cameroon in addition to being a Mayor – Fotso Victor. He died recently too.” Dr Teke Ngomba whose Ph.D. research focused on analysing political campaign communication processes and changes in contemporary Cameroon told GhanaFact.

Yes. Cameroonian President, Paul Biya is 88 years, and one of the oldest and longest-serving leaders in the world, after holding a tight grip on power in the central African country for 38 years. However, he is not currently campaigning for reelection because the country’s last presidential election was in 2018 and the results were declared in his favour – seventh term in office- which is to end in 2025.

Meanwhile, there is an ongoing civil war in Cameroon, mostly in the Anglophone regions started in 2017 after government security forces used lethal force to put down a peaceful protest against perceived marginalisation by the country’s majority Francophone government.

The two claims are FALSE.

PrevPreviousFAKE: President Kagame has NOT accused Ghana gov’t of corruption as captured on viral image
NextFALSE: COVID-19 vaccines are NOT poisonous and you don’t need to drink charcoal powder mixed in warm water to detoxNext