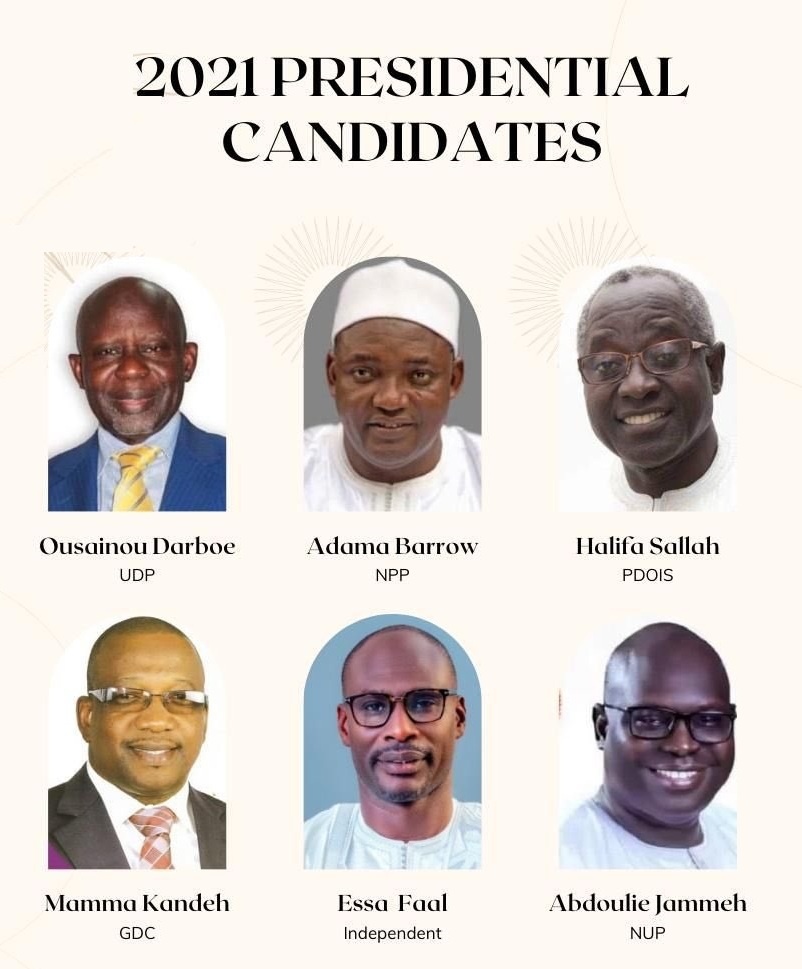 Gambians will head to the polls on December 4 to elect a president who will manage the affairs of the country for the next 5 years.

This presidential election is expected to be highly contested, as the country seeks to consolidate its democracy following the 2016 election that led to the ouster of the long-serving dictator, Yahya Jammeh.

There are six presidential contenders in the upcoming election, which include incumbent Adama Barrow.

Find below brief profiles of the candidates aiming for the highest political office in the Gambia:

In 2016, Adam Barrow was chosen by a coalition of seven opposition parties to contest against then-president Yahya Jammeh.

He went on to win 43% of the votes, unseating Jammeh who had ruled the country for 22 years.

Before this, he was only a treasurer of the United Democratic Party (UDP) and had failed in 2007 to become a legislator after being beaten by Mama Kandeh (another candidate in the upcoming presidential election).

Barrow, 56, formed the National People’s Party (NPP) in late 2019 in a bid to extend his mandate.

Subsequently, the NPP formed an alliance with the political party of former Gambian President Yahya Jammeh. But this was soon rejected by the former dictator.

At 73, Ousainu Darboe is the oldest of all the candidates in the December 4, 2021 polls. This is his 5th time contesting in a presidential election in the Gambia and only missed the 2016 elections because he was serving jail time over protests he led demanding the release of a youth leader in his party(UDP), Ebrima Solo Sandeng.

As the leader of the largest opposition party(UDP), Darboe contested former dictator Yahya Jammeh in 1996.

Darboe between 2017 and 2019 served as Foreign Affairs Minister and later as Vice President in the current government.

In 2007, he beat Adama Barrow to the National Assembly seat for Jimara Constituency in the Upper River Region.

He proceeded to participate in the 2016 election and won 17% of the total votes cast.

Jammeh’s supporters, who split from the main APRC, have since joined Kandeh in campaign rallies country-wide.

Party motto: One Gambia one people

He is the longest-serving opposition figure in The Gambia. In 1986, he set up and led the People’s Democratic Organisation for Independence and Socialism (PDOIS) – a socialist party.

He is currently the National Assembly member for the Serekunda constituency.

In 2006, he managed to win only 5% of the total votes cast as the leader of the coalition, the National Alliance for Democracy and Development (NADD).

Previously he contested elections for the house of Representatives in 1987 and 1992. At 68, he has declared the intention to retire if he loses in the December 4 polls.

He started his legal career as a State Counsel at the Ministry of Justice in The Gambia in 1994. During this period he served as Counsel to the Commission of Inquiry into the Financial Activities of Public Corporations.

Currently, Mr Faal serves as Counsel for Charles Ghankay Taylor (former President of Liberia) before the Residual Special Court for Sierra Leone and also Counsel for Saif Al Islam Gadafi at the ICC. He is also Counsel for victims in the Darfur cases and victims for extrajudicial killings in the Philippines before the ICC.

Abdoulie Ebrima Jammeh is the founder and party leader of the National Unity Party (NUP). He was also director-general of Gambia Civil Aviation Authority under Yahya Jammeh.

Mr Aboulie Jammeh also served as head of the Banjul Accord Group Secretariat, an ICAO Sub-Regional Grouping of ECOWAS CAA’s for the same period.

Between 2009 to 2012, he served as project manager for Banjul International Airport Improvement Project and Corporate Planning Manager, The Gambia Civil Aviation Authority, among a number of other roles.

Mr Jammeh has obtained an MSc Development Management, PGD Information Systems Management in Glasgow Caledonian University, the UK in 1994 and (Information Technology Management) Institute of Systems Science, the National University of Singapore in 1989.